All Sorts of tid-bits

You know all those blogs out there with the really cute backgrounds and the music player and all the bells and whistles? Well, my blog isn't like that. I'm sort of suffering from blog envy. I don't know how many times I have tried to change the template with something that I've found on a blogger website but I always get an error message. So I'm stuck with the templates provided by our dear friends at Blogger. I guess it's not too bad, although, I'm not crazy about the dark dots, so I may be forced to change it, yet again.

I didn't get in to University of Cincinnati. The application deadline was 1/15 and I got an email (yes, they reject you via email these days) this morning at approximately 7:30 telling me that, although they enjoyed reading my application, they did not want me to be a part of their 2009/2010 program. I thought I had a fairly competitive application...go figure. I did email them back asking if they could give me more details about why I wasn't accepted. Was that inappropriate? I guess it doesn't really matter if it was or not, I didn't get in and I really want to know why they didn't accept my application. Was it really that, as qualified as I am, there were even more people that were more qualified than me? Or is it my entire application and research interests don't belong in the Academic Field of Women's Studies? I'm upset but more just anxious. What if I don't get into Sarah Lawrence? What am I going to then? So all morning I've been frantically trying to come up with Plan B and Plan C and possibly even Plan D. So if anyone has suggestions...I'm all ears!

In other news, Lisa turned 23 last week. I had a party for her. Lots of people said they were coming but the night of, only four people showed up. It was irritating. If you can't come then say no, but if you say you're going to come, then you should come! or if something comes up, let us know. But despite the lack of attendance, we had a good time. Those that came were fun and entertaining. Anyone that knows Lisa well, knows she has a love for all things fast and on wheels - mainly cars and motorcycles. So I did a race themed party. The decorations were fun, if somewhat childish. All in all, we had a good time. (Pictures below)

Last night I went to see "Taken" with a group of friends. It's about an ex-CIA operative (Liam Neeson) whose daughter gets taken while she's in Paris by Algerian sex slave traders. So off he goes to Paris to get her back. It was so good! You see Liam Neeson in a whole new light. There was lots of fighting and chase scenes but it wasn't excessive. It's about what you would expect in a Bourne movie. Liam Neeson, who I've always loved, kicked some serious butt. My friend said he was like an over the hill Jason Bourne. So worth sitting on the third row for. 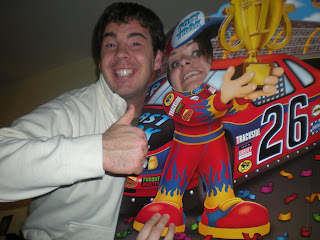 The Race Car photo cutout- everyone had their picture taken 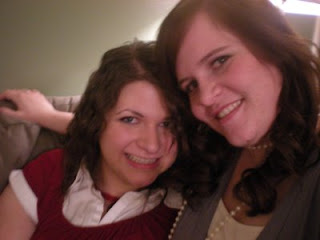 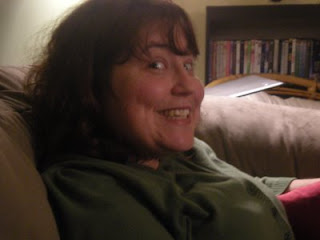 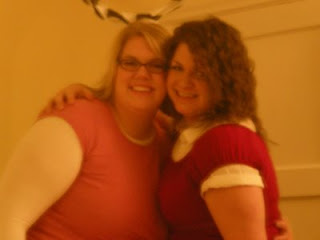 Heidi and the Birthday girl 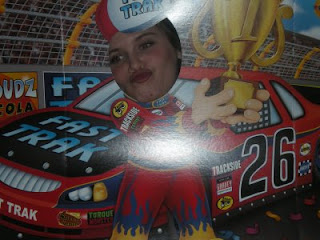 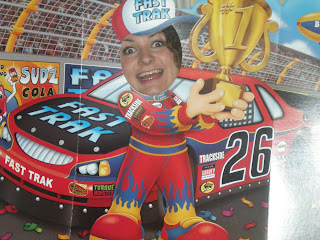 My sister posted about dream interpretation. She also posted a link to a dream website. So I had a dream last night and I don't remember anything except there was a frog in it. The frog was in one of those big tin coffee cans and then it jumped out of the can and around the room. So I went to the dream website and this is what it says about frogs:

To see a frog in your dream, represents a potential to change (applying to grad school??) or something unexpected. The frog may be a prince in disguise and thus, signify transformation. Alternatively, the frog symbolizes uncleanness (my room looks like my closet exploded and my car hasn't been washed all winter), fertility, or rebirth. To see frogs leaping in your dream, indicates your lack of commitment. You have a tendency to jump from one thing to another (How many times did I change plans this year? MBA, Law, now grad school). Alternatively, it may suggest that you are taking major steps toward some goal (applying to grad school).

I've spent most of my day reading my old college papers. Most of them are on floppy discs, old school, I know. So I had to start up my old laptop with the floppy drive and then save them to a USB. I even have a few things from high school. Why am I reading my old papers you ask? Well, I'm trying to figure out which one I'm going to include in my graduate school applications. Very exciting, I know.

I am trying very very hard not to get overly frustrated and upset over this whole process. I feel completely and totally lost here. I have spent a good portion of the day Google-ing "Women's History Graduate Programs" and "Graduate Programs - Women's History" and "Womens' Studies Graduate Programs"....you get the idea. I've only found two really good options. Sarah Lawrence College and University of Cincinnati. When I was looking for undergraduate schools I applied to 8 or 9 different schools but back then I had a professional college counselor that started working with us during our junior year of high school. It's a little different when you're trying to figure this all out on your own. I'm taking the GRE next Saturday. I'm not terribly worried about it. My verbal score is really the only thing that needs to be really strong and that shouldn't really be a problem. But I need to find 3 people to write recommendations for me, preferably someone that is familiar with my work as a student. I haven't been a student for almost 3 years! I have to write a personal statement in addition to an autobiography and request official transcripts from Scripps.

I'm trying really hard not to freak out. Thursday night I couldn't sleep because I couldn't stop thinking about all of this so, I got up and started my "autobiography"...at approximately 2 in the morning.

I think part of my anxiety is knowing that I cannot stay where I am for another year. I just can't do it. The very thought of it makes me want to scream, cry and punch something all at once. I love a lot of things about my life right now but I absolutely cannot stand my current job. There are good days and I enjoy the people I work with but the work itself is not interesting to me anymore. And I know that I can always look for a new job, I've done that...several times. I just haven't found anything that appeals to me or that I wouldn't have to take a significant pay cut.

It's hard doing this all on my own, without any direction from anyone. No wonder it's taken me this long to get going. It's a good thing I had a college counselor in high school, who knows if I would have ever gone to college!